What is the hematologic system? 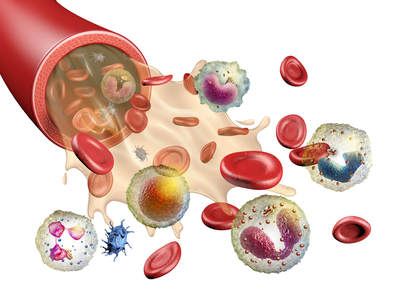 Hematology is the study and science of blood and blood forming tissues in the body. This includes both cellular and non-cellular parts of the blood. The blood forming system is called the hematopoietic system and is made up of different organs and tissues including the bone marrow, spleen, tonsils, and lymph nodes.

The liquid part of blood is called plasma and is made up of water, sugars, salts, fats, and proteins. One of the main jobs of plasma is to deliver blood cells around the body. Along with blood cells, essential nutrients, hormones, proteins, waste products, and drugs are circulated in the plasma.

Plasma is typically between 45-65% of the blood circulating in animals body.

A common blood test performed on plasma is a total protein (TP) reading. This is commonly done when obtaining a PCV (see Red blood cells below). We place a small amount of plasma (or serum) on a refractometer and read out the results. This tells us the amount of proteins circulating in the blood stream.

(This section is being updated, check back soon)
Low Proteins

Red blood cells, or RBC's, are also known as erythrocytes. The main job of RBC's is to carry oxygen (O2) to the cells throughout the body. After depositing the oxygen to cells, the cells release carbon dioxide (CO2) and the RBC's carries it back to the lungs to leave the body when we exhale. RBC's can also transport drugs and hormones throughout the blood system.

RBC's make up the majority of cells within blood, usually between 35-55% of the total volume. In veterinary medicine the way we measure the amount of RBC's in the blood is by measuring a hematocrit or a packed cell volume (PCV).
Typically samples are placed into a lavender top tube (LTT) which contains the anticoagulant EDTA. This keeps the sample from clotting and we can run a full CBC, or complete blood count, obtain a PCV, and even perform cytology on the sample.

​To perform a PCV, we transfer a small amount of whole blood into the hematocrit tubes and using a centrifuge, spin the tubes. This causes the red blood cells to spin to the bottom of the tube, since they are heavier than the liquid plasma portion of blood. Once it is spun down, we measure the percentage of RBC's in the blood. This give us our PCV. In the photos below, the patient's PCV is 40%, or normal.

Anemia is defined as a decrease in red blood cell levels. So, technically in dogs and cats, anything below 35% is considered to be anemic. Anemia increases in severity the lower the PCV level in a pet. There are several reasons a pet can be anemic including: blood loss (an injury or some sort of trauma), decreased production of red blood cells, increased destruction (like immune mediated), or a combination of these.

Pets that are anemic have pale gums (normally it is a pretty pink color), the paler the gums the more anemic the pet. Anemia causes the pet to be lethargic or weak because they doesn't have enough oxygen getting to their cells to work hard. Imagine trying to exercise on the Himalaya's without an oxygen tank. You'd feel weak and slow. That's what happens if there aren't enough red blood cells (oxygen tanks) to carry the oxygen where it needs to go (the cells).

There are also two types of anemia. Regenerative or non-regenerative.

Regenerative anemia means the body is noticing a drop in red blood cells and is producing more in response to the anemia. The person looking at the blood under a microscope (either a pathologist, veterinarian, or a veterinary technician) will look to see if there are baby red blood cells present. These red blood cells look different and if we see more of them present, we know the body is responding the way it should.

Non-regenerative anemia is when the body isn't, or can't, respond to the decrease in oxygen getting to cells (remember RBC's carry the oxygen). Looking at a blood smear (blood on a microscope slide), we'd notice older red blood cells and few or no young red blood cells. This can mean issues with the bone marrow, or chronic anemia.
We discuss blood transfusions here.

The opposite of anemia is polycythemia. This means a pet has too many red blood cells floating around in the blood stream. Wait? How could that be a bad thing? Imagine trying to squeeze a thick jam through a straw vs a nice lemonade. That's the problem when the blood gets too thick, it gets difficult to push around the body and isn't very efficient at its job. 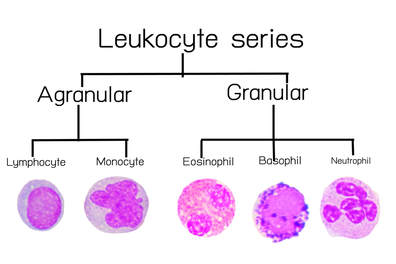 White blood cells, or WBC's, are also known as leukocytes. They make up a much smaller portion of the blood, only about 1% of the total blood.

The main job of WBC's is to fight off infection. There are several different cells that are classified as WBC's including lymphocytes, monocytes, eosinophils, basophils, and neutrophils.

When looking at a complete blood count (CBC) we look for increases or decreases in these cells. Increases typically indicate an infections, and decreases can indicate chronic infection or decreased production.

Agranular literally means without granules. The two white blood cells without granules in their cytoplasm (the body of the cell) are lymphocytes and monocytes.
Lymphocyte:
​Lymphocytes are broken down into two types: B cells and T cells. B cells produce antibodies so the body can attack invading organisms like viruses, bacteria, or toxins. T cells break down attack the body's cells that are labeled as infected either by viruses or cancer.
Monocyte:
A monocyte travel through the blood stream and eat microorganisms, foreign material, dead cells, and help boost the response of the immune system. Think of them as the garbage trucks of the blood.

Eosinophil:
​An eosinophil's small granules (that stain bright pink) carry enzymes that release during an infection, or allergic reaction.
Basophil:
​Basophil's granules stain a dark blue-ish purple. The enzymes in their granules are released during an allergic reaction.
Neutrophil:
​Neutrophil's have neutral staining granules and also work to fight off infections by eating microorganisms in the blood.

Platelets are also known as thrombocytes. Their main job is prevent bleeding anywhere the blood vessels are ripped, punctured, or otherwise not in tact. They take the same amount of time to be created in the bone marrow as RBCs, 7 days, and circulate in the blood stream for only 5-9 days before the spleen breaks them down because they are too old. That means platelets are turned over every 2 weeks in the body.

Some times the immune system over reacts and will actually attack the cells within blood. These diseases are covered more in depth here.
Immune Mediated Blood Disorders

If you'd like to read more about blood and hematology, check out our posts related to hematology.
Blog posts about the hematology system

Signup for news and special offers!

Below are some resources we recommend: