Who can get IMHA?

It is when the body’s immune system sees erythrocytes, or red blood cells (RBCs), as a foreign invader needing to be destroyed. The immune system no longer recognizes the RBC’s as belonging to the animal and starts breaking down the cells. This causes severe anemia, or low red blood cell counts.

As you can imagine RBC’s are essential for life. They are important for the body as they carry oxygen from the lungs to the rest of the body. That is why when a patient is anemic, they are weak and have exercise intolerance because the cells in the body are not getting the oxygen needed to perform their tasks. The term for decreased oxygen in the blood is hypoxemia.

In dogs and cats we check the packed cell volume, or PCV, to tell us how anemic the patient is. Normal for dogs and cats is typically between 35%-55% and 25%-45% respectively. What this means is of the blood circulating in the body, how much is RBC’s and how much is fluid. The body likes to have a normal percentage of RBC’s and fluid concentrations.

To know what the PCV is, a small blood sample is place into tubes and spun down with a centrifuge. This can take anywhere from 8-12 minutes. After the sample has been centrifuged the blood has separated into solids (blood cells: predominantly RBC's) and the liquid, plasma, portion of the blood. See the pictures below.
A patient with IMHA may present at the veterinarian with severe anemia, or a PCV below 10%-12%. These patients will appear extremely pale and lethargic. You can easily check your pet by looking at their gum color. Normally the gums are a happy pink color (unless they have black pigment then it’s much harder to tell, but you can try looking at the tongue or the corners of the eyes). A severely anemic patient can have white gums.

If a patient is severely anemic or symptomatic (like struggling to breathe), a red blood cell transfusion most likely will be needed to help supply the body with much needed oxygen. A blood transfusion will require hospitalization to administer and monitor closely for any potential reactions. Depending on how long it takes to stop the immune system from attacking the RBC’s, additional blood transfusions may be needed before the pet can go home. Close monitoring of the PCV will indicate how well the body is retaining the RBC’s.

It is also important for a complete blood count (CBC) to be done to evaluate all of the cells in the blood to make sure there are no other concurrent diseases. Check out an example of a CBC here.

Anemia in and of itself does not diagnose IMHA. One thing your veterinarian may look for on a blood smear are spherocytes. A blood smear is a thin layer of blood on a microscope slide. The veterinary team member will evaluate the slide and look for characteristic spherocytes. ​ 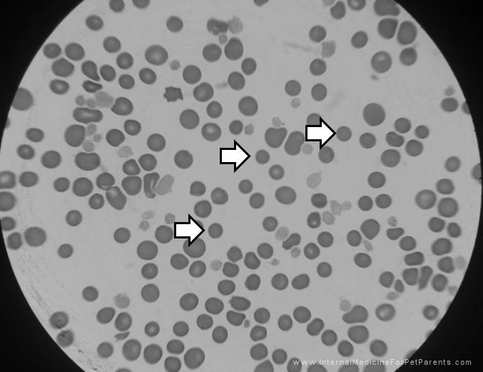 Arrows pointing to spherocytes (smaller and darker centers).
The best way to describe what these are is imagine a regular RBC in the shape of a whoopie cushion. A round ball that is squished flat in the middle. A spherocyte is a RBC the shape of a regular round ball. The reason the RBC is now round is that the immune system as taken little bite sized chunks out of the surface of the RBC and it looses its normal shape. These are very distinctive looking on a blood smear and are diagnostic for IMHA. We know that the immune system is starting to be controlled when we no longer see those on blood smears. (The image above is of a newly diagnosed Evans Syndrome patient where platelets are being produced, but the RBC's are still being attacked.)

Another term used with anemia is regenerative or non-regenerative. This literally means whether or not the bone marrow is responding to the anemia by making new red blood cells or not.

When the body notices hypoxemia (remember this is low oxygen levels in the blood) then it stimulates the bone marrow to increase red blood cell production and will even release immature, or young, cells into circulation. These red blood cells may still have a nucleus, an nRBC, or may be bigger and stain a darker blue instead of the usual purple. This is normal and is called a regenerative anemia.

If the body isn't responding with an increased production of RBC's we would not see these immature cells and we call this non-regenerative anemia. ​ 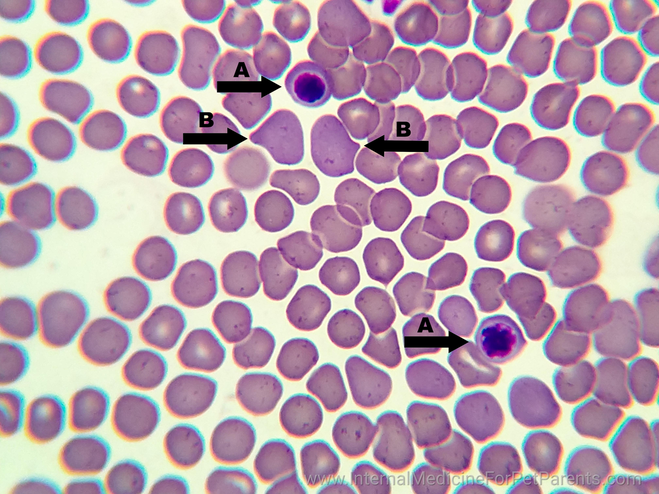 Microscopic Slide Image: Arrows A are nRBC's, Arrows B are immature RBC's
Another important blood test to monitor is bilirubin in the pet. Depending on where the RBC’s are being destroyed, bilirubin can increase. Bilirubin is released from the RBC when it ruptures. If it ruptures floating around in the blood stream, a build up of bilirubin can occur. This causes the pet to look jaundice/icteric, or yellow/orange in color.

​These pets require more intravenous (IV) fluids to help flush the bilirubin out of the system. This can take several days and these pets may be in the hospital for a week or more. Patients that have increased bilirubin tend to have a poorer prognosis (long term outcome) than pets that do not have a rise in this value, but this is not an automatic death sentence.

What happens after diagnosis?

It is common for patients to be hospitalized a few days to a week depending on how their body’s respond to the medications. ​​We've discussed immunosuppressive drugs in the post titled Treating Immune Mediated Diseases, check it out for more info on what drugs may be sent home.

Close monitoring of the PCV and CBC will help veterinarians know when treatment is starting to suppress the immune system. It can take 2-5 days for steroids to kick in. It also can take bone marrow 7 days to create new blood cells and release them into circulation. It can be common for a PCV to be run twice a day while in the hospital.

It can be common to keep pets hospitalized until the PCV stops dropping and stays static or starts going up. It also depends on how the pet is doing overall. This is a discussion with the veterinarian taking care of your pet. ​

Newly diagnosed IMHA patients may have a blood transfusion if their PCV's are too low (below 12% typically) or the pet is symptomatic (this can be anywhere below 20%).

Being symptomatic means they are struggling to carry enough oxygen to their body. These animals usually have increased respiratory rates, severe weakness, and may not be eating. In a patient whose PCV has been gradually dropping, they may not be severely symptomatic at 12-13%, but a patient whose PCV dropped quickly may struggle at 20-25%. That's why it is best to treat the pet, not the number.

A common non-invasive test for checking a pets oxygenation ability is an SpO2, or pulse oximetry. This device measures the percent of oxygen saturation in the blood. It can be misleading with anemic patients since the red blood cells floating in the blood stream may be fully saturated with oxygen. These patient's SpO2 may be normal, but they still may not be getting enough oxygen to their cells. So, it's not an issue with how much oxygen the cells can carry but not enough cells to carry the oxygen.

The best way to know for sure is to perform an arterial blood gas analysis. It requires a blood draw from an artery. This analyzes the blood directly for how much oxygen is attached to the red blood cells in circulation and also carbon dioxide. Normally, we use a periphreal vein not an artery. This is NOT recommended for an IMHA patient because it is invasive.

What complications do you have to watch for?

We hope this helps with this confusing and overwhelming disease. Please feel free to email at yvonne@internalmedicineforpetparents.com and I'll be happy to talk to help if I can.

Learn more about IMHA and related subjects by checking out the hematology and immunology sections of the website.

Also visit the other blog posts related to the immune system and IMHA here.