What is the Respiratory System? 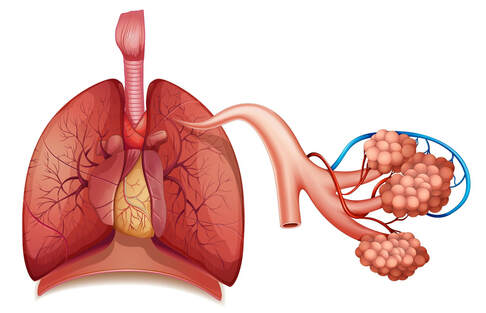 The basic function of the respiratory system is to bring oxygen to cells in body. Cells require oxygen to function, it is a part of metabolism.

In order to deliver oxygen to the body, we have to move air from outside of the body to the lungs. When the brain registers a need for oxygen, it simulates the muscles of the chest (thorax) and the diaphragm (the muscle separating the chest cavity from the abdominal cavity) to contract increasing the space in the chest. This causes a negative pressure within the chest and air rushes through the nose or mouth, down the trachea, into the lungs through the brochus, to the bronchioles, all the way to the smallest part of the lungs: the alveoli.

At the alveoli there is only one cell layer dividing the air in the lungs and the capillaries (the smallest blood vessels in the body). Oxygen crosses this cell membrane and exchanges with carbon dioxide attached to red blood cells floating through the capillaries.

As we exhale, the chest and diaphragm muscles relax and push the air (now full of carbon dioxide) out of the lungs through the same structures the breath in traveled.

Parts of the Respiratory System

The upper respiratory is from the tip of the nose down to the larynx (just above the trachea).

Nares: the outside part of the nose also known as nostrils

Nasal cavity: includes turbinates which are intricate structures within the nose that helps clean and warm the air entering the body. This is a common area for foreign bodies (such as foxtails) to become lodged within.
​
Sinuses: these are accessory structures to the respiratory system and are located above and below the eyes.

Pharynx: located behind (caudal) to the nasal cavity and the mouth (oral cavity) and above the esophagus and larynx. This area is known in humans as the throat.

Larynx: located at the top of the trachea it helps protect the trachea from aspirating food or water into the lungs. It is also has the vocal folds and is known as the 'voice box'. This is the structure that is not functioning properly in pets with laryngeal paralysis.

The lower respiratory starts at the trachea and ends at the smallest level of the lungs called the alveoli, where the true gas exchange occurs.

Trachea: known as the windpipe, this is a tube structure that allows air to pass from the upper respiratory down, through the neck, and into the chest to the lungs. This structure has cartilage rings circling it to help retain it's tube structure against the pressures within the thoracic cavity.

Bronchi: these are the first branches of the air passageways into the lungs. The right and left main bronchus are the widest part of the branches and have cartilage supporting the structures.

Bronchioles: smaller than the bronchi, the bronchioles no longer have cartilage supporting the tubular structures.

Alveolar ducts: these are the connection between the bronchioles down to the alveolar sacs.

Alveolar sacs: this is where a cluster of alveoli are together.

Alveoli: the alveoli are the smallest part in the lungs and these small structures are where the true respiration, or gas exchange, happens within the lungs.
Here's a quick video on how the lungs work:
Articles about the Respiratory System
Was your pet diagnosed with pneumonia? Check out the pneumonia article here.

Ready to Work Together?

Join our community and learn how to live a happier, healthier life with your fur babies.